The Early Days of Citroën  – From an article by Daniel Eberli, 1994, Switzerland 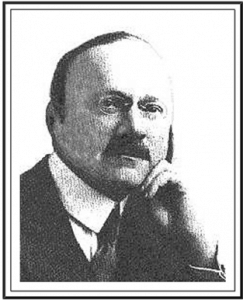 Citroën automobiles began. In 1934 when Citroën presented their first front-wheel drive cars and started a revolution in auto production.

André Citroën was born in 1878. A successful student, he attended the Polytechnical school in Paris and worked for some time with the car company “Mors”. In 1905, at the age of 27, he founded his first company, “André Citroën & Cie”, which was changed to “Société des Engrenages Citroën” (Citroën Cog Factory ) in 1913. Also in 1913, Citroën founded yet another company to take advantage of a patent he had regarding carburettors. This company was located on the Quai de Javel (today Quai André Citroën) in Paris. Early in his career, Citroën was impressed by the production methods of Henry Ford, who pioneered the use of the assembly line as early as 1908 for the Ford Model T in the U.S.A. Citroën understood that he had to analyse production methods and that he had to divide it into single logical steps in order to calculate the industrial production of an item mathematically.

With the outbreak of World War I, André Citroën received a commission, beginning in 1915, to produce 7,500 75mm grenades – good work for a small company. Citroën was able to convince the French Ministry of Defence that he could deliver much

bigger quantities with industrial production. The company grew rapidly and in 1918 it occupied 80,000 square metres at the Quai de Javel in Paris where, in 1914, there were still garden allotments. 12,000 people were occupied producing grenades. At the peak the output reached 20,000 pieces! The company was very progressive in the social field: a cantine and a kindergarden were present as was a dental clinic. During the war, Citroën started thinking about the “days after”. He talked about building 1,000 automobiles a day at a price that would enable everyone to own one of his cars. 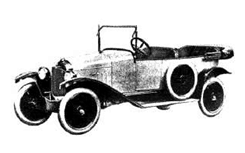 By 1919, the first Citroën auto was produced – the Type A. Equipped with a 4-cylinder engine of 1326 cubic cm (10-fiscal-HP) capacity, it was capable of a top speed of 65km/h. One was able to order six different body styles directly from the factory, this at a time where one got the chassis and the engine from other makers and had it completed by a coachworks of your own choice! Even the spare wheel and the lighting were included in the price of F7,205. From June to December 1919, Citroën produced 2,500 cars. In 1920, they had already produced 20,200!

Also in 1920, Citroën first tested half-track autos called “Autochenilles” using the patents of Adolphe Kégresse. In impassable regions they were very useful, and their reliability helped to improve the reputation of Citroën as an automobile manufacturer. The half-tracks were not only used by the armed forces, in road-building and agriculture, but also by different post offices, among them the Swiss PTT which equipped their “Autochenilles” with skis at the front.

In 1921, the first Citroën Taxis appeared on the streets of Paris. The big news at the Paris Motor Show in October was the 5 hp Type C, a real car for the people with 856 cubic cm engine, 60 km/h top speed, available as a Torpedo with two seats. The car was first available in the summer of 1922 and was sold only in one colour: lemon yellow.

The small car was a real success. In 1924, it was presented as a three-seater. The third seat was in the rear in the middle and the passenger put his feet between the two front seats. This version, named the “Trèfle” (Clover Leaf) gained a great deal of fame. Up to March 1926, it stayed in production with only minor changes – about 90,000 were built and quite a number still exist today.

André Citroën was very successful in drawing the public’s attention with elaborate publicity campaigns. In 1922, airplanes wrote the name “Citroën” in the sky over Paris; in 1925 the name “Citroën” could have been read on the Eiffel tower: 200,000 light-bulbs were necessary and several kilometers of cabling!

From 17 December 1922 to 7 January 1923, a Citroën expedition crossed the Sahara desert by automobile for the first time, from Algiers to Timbuktu, a distance of 3,200 kms, averaging 150 kms a day with 10hp B2 half-tracks – an enormous effort for the period!

From 28 October 1924 to 26 June 1925, a further expedition, the famous “Croisière Noire” (Black Journey) crossed the African continent from Algeria through Kenya to the Cape of Good Hope.

On 4 April 1931, the “Croisère Jaune” (Yellow Journey) started in Beruit. The goal was to reach Beijing with the C4 and C6 type half-tracks. In between there were deserts, glaciers, mountains, and war zones. One C4F reached 4,208m and set a world altitude record for cars. In the Himalayas, part of the way through, the paths were not driveable and the cars had to be taken apart, carried through, and rebuilt afterwards! On 12 February, 1932 the cars triumphantly reached Beijing.

From the beginning of 1932, the C4 and C6 were equipped with the “Floating Power” engine which was mounted in a new way, using a Chrysler patent. The engine was

secured with rubber mounts instead of being bolted directly to the chassis, thereby eliminating major engine vibrations. The first cars using this new engine mounting were recognizeable with a stylized swan in front of the Citroën double chevrons.

André Citroën advertised his products not just to adults. Soon he produced toy cars to capture the attention of children – his future customers. The first words he wanted them to be able to speak were: “Mama, Papa, Citroën”.

The first clouds on the Citroën horizon appeared after the Wall Street crash of October 1929 and the ensuing world crisis. In 1933, at the peak of the crisis, Citroën rebuilt the factories at the Quai de Javel completely, in order to have sufficient capacity to produce his impending new model. Enormous halls were built. 6,000 guests were invited to the grand opening.
The rebuild was a big challenge for the company. In April 1933, t here was a strike which served to amplify the difficulties. The cars didn’t sell well abroad because of the exchange rates and the restrictions certain countries introduced against foreign products. By the end of 1933, Citroën had so many debts, that the Michelin company had to be called for financial help.

With front wheel drive to the future… 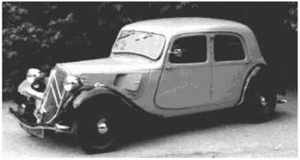 Within a short period the Traction Avant Type “7” was developed – a car that was radically different in all respects to other cars of the time: self-supporting uni-body, front-wheel drive, torsion bar suspension, to mention only the most important features. The first plans even called for an automatic two-speed transmission – a feature that had to be dropped. The most significant feature was that the car was about 20 cm lower than its predecessors and contemporaries – with equal or even more interior space. Thanks to the low center of gravity and front-wheel drive, the Traction Avant has superb road-holding.

The following body styles were offered by the Citroën factory:

In 1934, about twelve of the famous 8-cylinder prototypes with front-wheel drive were built – the “22CV”. Three of them were presented to the public on the occasion of the Paris Auto Show. They never saw series production and none of them are known to exist today.

During the same car show, Citroën showed a publicity film in which you can see a new Traction Avant being pushed over the edge of a 8 m high cliff. It lands on its nose, is thrown back, lands on its nose again, and sits on its four wheels after rolling. Only one window is broken, all doors open and close. The car drives off by its own means!

By this time all weaknesses in the 4-cylinder model were eliminated, but for André Citroën it was too late. By 21 December 1934, the company went into bankruptcy. André Citroën died as a poor broken man on 3 July 1935. 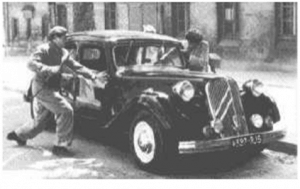 Under Michelin the company developed further. At the beginning of 1939, the 11CV Commerciale on the long wheelbase was presented. More importantly, the Traction Avant 15/Six was introduced with a top speed of 130 km/h and its legendary driving abilities. Its 2867 cubic cm 6-cylinder with 77 hp gave the “Reine de la Route” (Queen of the Road) abilities that are still quite modern today. As the underworld also liked this special fast car, it was soon known as the “gangster limousine”. The police with the 4-cylinder models had great difficulties following their “enemies”. 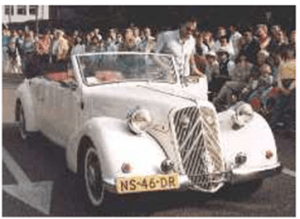 During WWII the production practically stopped. The available cars were used by the German occupying forces and by the French Résistance. After the war the pre-war models were produced again, but only a limited range was offered. The cars were still liked by business people, doctors, and rich farmers. In the years following WWII, most of the Tractions were delivered in black and that’s how most people remember them.
Unfortunately the Cabriolets and Coupés were not built any more after the war. Only some coach builders are producing small series or single items of the open cars. In Switzerland these are famous companies like “Langenthal”, “Worblaufen” and “Beutler”.

During the Paris Car Show of 1948 the 2CV was introduced. Smiled at by all, this comfortable small car of 375 cubic cm started a long life around the world.

In 1955, we start to see the end of the Traction Avant. “La Déesse” , “The Goddess”, was presented and the automobile world was once more astonished by Citroën. “This is not the car of tomorrow, it’s the car of today. It’s just that all the other cars are from yesterday…” was one of the publicity slogans. Indeed, it was and continues to be an unusual streamlined car – with front-wheel drive, height adjustable hydraulic suspension, power steering, semi-automatic gear box, one spoke safety steering wheel, and much more. 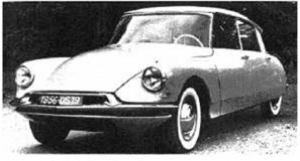 Nevertheless it took up to 25 July 1957 until the last of the famous Tractions, an 11CV Familiale, rolled off the production line.

The legend lives on!